Walk into Vi Barrett’s living room and you walk into an era when FBI guys were called “G-men,” women were “dolls” and a “dame with good gams” might be favored over other “skirts.”

At least that’s the stereotype.

Fortunately, Barrett was around in the 1940s to set people straight and continues to explode stereotypes today.

But these days, it’s more about blowing up perceptions over age – she’s 89 – than busting gender barriers.

On a desk in a corner of her living room in Fullerton, there is a contraption the size of a fist made of chrome and two tiny Lucite paddles. Barrett reaches out and with her thumb and forefinger and bats the little paddles back and forth.

Instantly, the unmistakable dit-dit-dit-dah-dah-dah of Morse code fills the room.

Next to the ultra-modern chrome gizmo, Barrett picks up a little brass, steel and wood machine called a “straight key” that her father gave her more than 70 years ago.

Barrett, you see, is a long-time expert in Morse code, can still tap 15 words a minute. And when you discover her background, it all makes sense.

As a teenager in Los Angeles, Barrett fell in love with ham radio and became one of the few women to enter what was then considered a man’s world of electronics.

After much conversation, I discover Barrett also was a G-man of sorts.

When her uncle first showed off his ham radio, Barrett was a 14-year-old Girl Scout and music major growing up in South Central. Back then, she didn’t give a whit about the dials, knobs and meters that attracted some guys to ham radio.

What Barrett saw was a way to communicate with the world.

“I thought it was so exciting to be able to talk to someone in a different city or a different state,” Barrett recalls, her eyes dancing at the memory. “Right away, I started saving my babysitting money. I wanted to buy a receiver so bad.”

Barrett heard about amateur radio’s annual event where hams gather, set up antennas and invite the public. In 1946, Dad agreed to take her to Baldwin Hills where ham operators carried their rigs.

“Are you a ham?” one gentleman asked.

At that moment, Barrett found her first mentor. Then she found another. And another.

The teenager studied theory, how to operate a receiver, how to use a transmitter. She mastered Morse code.

In 1947, she sat next to the ham radio operator who patched Thor Heyerdahl’s location aboard the Kon-Tiki to Washington, D.C.

The following year, at age 17, she made her way to the Federal Building in downtown Los Angeles and took her ham test. She was the only female in the room.

A few hours later, she also was the only female to walk out with a ham radio license, call letters “W6CBA.”

A few days later, Dad climbed onto the roof and set up an antenna. Barrett’s first call went to Colorado Springs.

As far as Barrett was concerned, it felt like reaching Antarctica.

Wrapping up her senior year in high school, Barrett took a ham radio class. Soon, the instructor asked Barrett to teach Morse code she was so good.

After high school, Barrett heard the FBI was hiring and convinced her mother to take her back to the Federal Building.

She was hired for the clerical pool and sat before a big Underwood typewriter. But that was only the beginning of what became a meteoric rise with the FBI.

Word got out that the young typist was a speedster with Morse code, that she had a ham radio license and was fast and efficient with radio voice communication. Soon, she was called to the office of the big boss, the agent in charge.

Unsure what the meeting was about, Barrett stood her full 5-foot-1 height and waited for the chief to talk.

Barrett knew the offer meant she would become one of the first female FBI dispatchers in history. She remembers, “Those were wonderful words for me.

“A bank robbery is a lot different than chatting with somebody. It was a wonderful, exciting job.”

Her favorite case was the Max Factor extortion scam in which the suspect demanded money in exchange for not blowing up a store. The blackmail money was left in an orchard by an agent who resembled the tycoon.

When the suspect grabbed the dough, agents jumped down from trees and nabbed the man.

Barrett recalls the perp walk in the hallway and laughs, “He was a pipsqueak.”

After getting married in 1954, Barrett left the FBI, but not her beloved ham radio. Like his father-in-law before him, soon her husband was on the roof erecting an antenna.

“Don knew that if he married me, I was going to have my ham radio station,” Barrett chuckles. “He knew he was getting a double package: wife and radio operator.”

While her husband ran his and his dad’s service station in Los Nietos, Barrett worked as switchboard receptionist for the East Whittier School District and raised the couple’s two sons and daughter (today, there are four grandchildren, all boys).

For two decades, the couple also volunteered with the Whittier Police Department while Barrett continued to volunteer as a ham. In Whittier, she allows, “I did everything but carry a gun.”

During the 1984 Olympics, she used her ham radio to help agencies connect. During the 1987 Whittier Narrows earthquake, she ensured hospitals coordinated.

“They call us a backup communication system,” she allows, “but we often end up being the primary with our radios.”

Barrett recounts the time one young man aboard a hospital ship in the South China Sea talked to his parents. “They were so thrilled to hear from their boy in Vietnam.”

Later, Barrett called back the parents and asked if they’d like another patch to their son.

The father quietly answered, “Our son was killed in action.”

In her living room, she has her transmitter, receiver, microphone and that chrome Morse code key ready. But it’s what’s hidden above that impresses.

Mind you, talking to Antarctica is no longer just a dream. With 194 countries documented, Barrett already has chatted with hams on the world’s coldest continent.

Accordingly, I’ll leave you with this: Dit-dit-dit-dah-dit-dah. 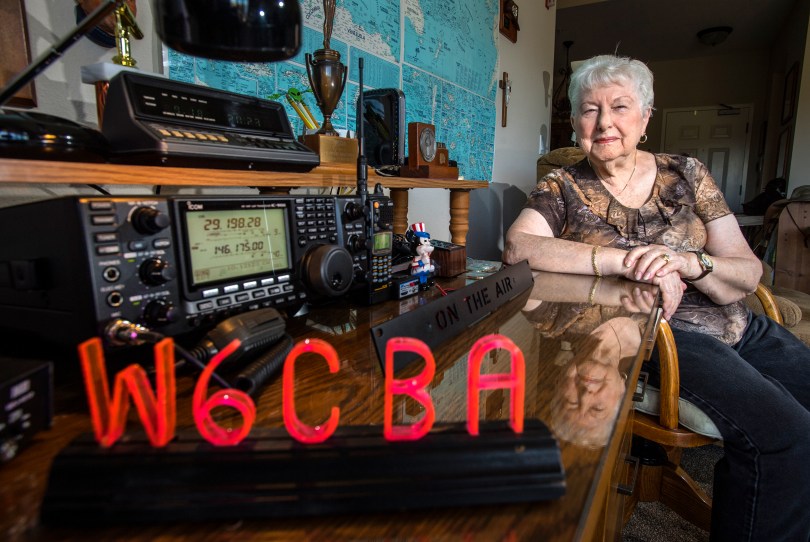 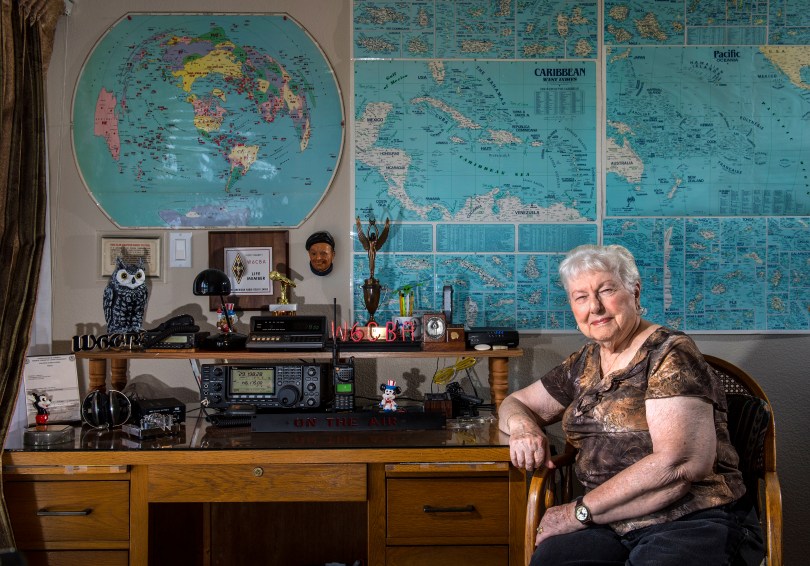 Search QRZ for a Callsign